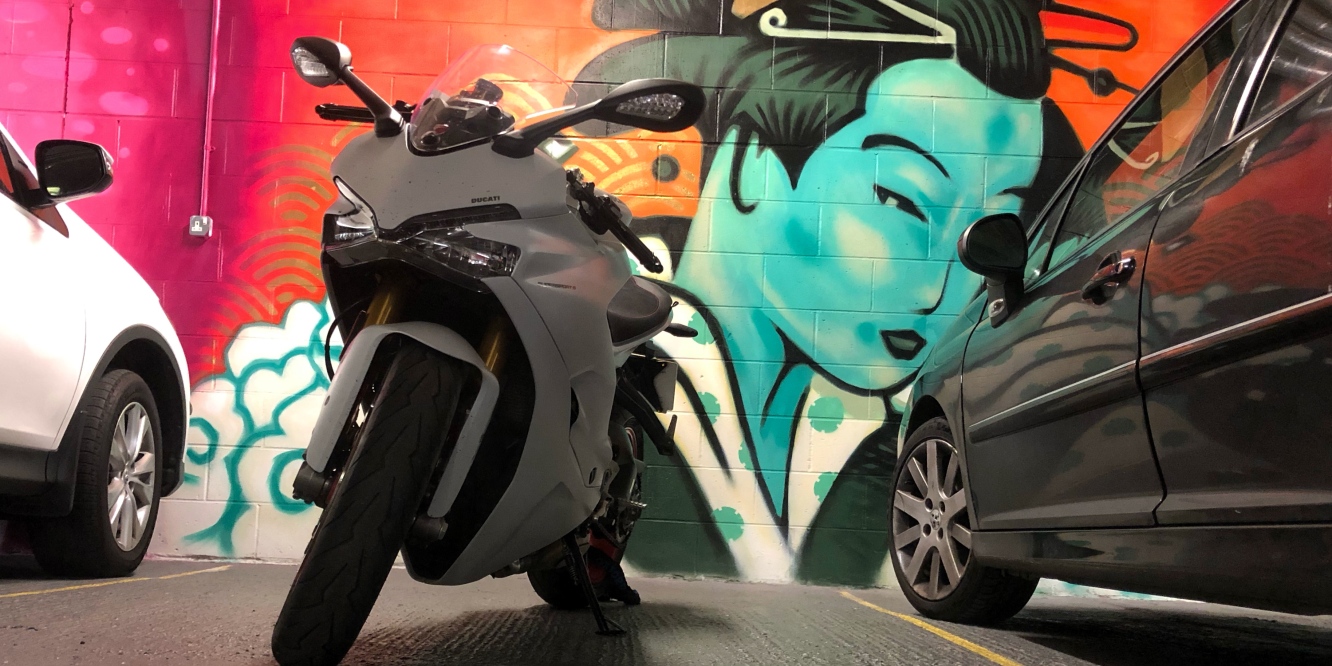 This weekend is a wash out and I am spending it at home resting, planning and strategising future work and fun projects as well as catching up on everything else. So this is a good time to reflect on my ride I’ve done last weekend from North Wales to Brighton.

I had to be in Brighton on Sunday 2nd June to project manage an installation of an exhibition stand for a client (which went really well!) and I was undecided on how to travel all that way for a couple of nights I needed to spend there.

At the same time a friend of mine was setting off on his solo trip on his bike to Siberia and he had the ‘official’ send off from a local bikers’ cafe on the Saturday morning. After much persuasion from him (all of about 30 seconds) I agreed to do the trip on my bike and ride with him to the Ace Cafe in London.

John’s trip is for a charity and you can read his story and donate here https://www.justgiving.com/fundraising/john-peers6

We set off on the Saturday morning and were incredibly lucky to have the hottest day of the year. The further south we went the hotter it was becoming. The start was very slow as I said I didn’t want to sit on the motorways all day but the A roads were bumper to bumper and our progress was very slow to the point we eventually said ‘fuck it’ and chose motorways until we arrived to the Ace Cafe. Ok, just to clarify, that was me saying fuck it, John would never utter those words.

For those that are not familiar with the Ace Cafe you can follow this link https://london.acecafe.com/history/ and read all about it. It is a fascinating story and full of history going back to its beginnings in 1938.

There was a real buzz when we arrived, interesting bikes parked outside, people coming and going, checking out bikes and sitting in the sun enjoying their drink and food.

We’ve stopped for coffee and cake and then continued the journey on M25 where John headed for the train to take him to the continent and I decided to head to Brighton down A24. A twitter follower suggested the route and it was much better than the quicker A23. It took me down some beautiful roads, full of lush greenery and sweeping corners, down to the coast where I followed the road to Brighton. Gutted I didn’t have the time to stop at Box Hill but it’s on the list for another time.

The coastal roads were busy and traffic slow moving but the sun and the smell of the sea made me smile and I didn’t mind at all. I finally arrived at My Brighton hotel, the reason I chose that was because they have a private and secure car park. It was £33 per night which was a bit steep but I figured it’s worth it to ensure I still have a bike for my return home.

I really enjoyed Sunday and that’s with the bike locked up in the garage! The job was going well, I wasn’t really needed on site so I made the most of the sunshine on the beach. It was so hot I even bought a hat!

I had to spend a couple of hours on site with my client on Monday morning so I didn’t set off until noon to head back home. I had a lunch meeting in Ascot which was a nice break and I had to be there at 1.00 pm so I chose the fastest route to get there. However, after the lunch I headed towards Cotswolds and stopped at Chipping Norton for a snack and a drink. The route from there back to the motorway was the most enjoyable and incredible beautiful. I was riding on some small country lanes and through some stunning villages. As the time was running away and the weather was getting colder and damper I kept going and didn’t look for photo opportunities but it’s one of the places I will definitely go back to.

So in total the stats of the journey were quite impressive for me. The route in total racked up over 600 miles which brings my bike’s mileage to 2995 miles since I’ve had it in January. The best bit about the whole trip is that I didn’t ache at all, the bike is absolutely perfect. Comfortable, fast and able to carry luggage without noticing it. I travelled with Kreiga 30 litre bag on the back seat which was more than enough for a three day trip.

Now the challenge is to pack enough for a two week trip in that same bag in less than a month’s time when I’m heading to Europe!

3 Replies to “The Ace Cafe London”